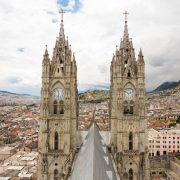 A few weeks ago we were invited by Habitat Secretariat to be part of the historic conference Habitat III, in the city of Quito, Ecuador, located 2850 meters (9,350 feet) above sea level!

The city, founded by Spanish conquistadors, is a UNESCO Human Heritage site since 1978 and a megalopolis with about three million people. Delegates from more than 150 countries and thousands of participants were involved in thousands of events focused on the future of human settlements inside or outside urban contexts.

For the UN the goal was to make the delegates sign the New Urban Agenda; for delegates and participants, the goal was trying to figure out how to implement policies of sustainability, inclusivity, resilience (and others) in urban contexts.

Undisputed protagonists (their conferences were the most crowded!) were mayors, local governments representatives and grassroots leaders who shared their paths, their mistakes and their achievements.

During the six days of Habitat III we had the chance to meet Rose Molokoane who on behalf of the poor people of South Africa was elected new president of World Urban Campaign; Rainer Kern and Charles Landry who design Mannheim through music and creativity: Demos Helsinki, Safecity, Pakhuis de Zwijger, Metropolis and the policy makers who are transforming Taipei in the world capital of design; Gregory and Simone from Citiscope, Saskia Sassen and Richard Sennett who, with Ricky Burdett and Joan Clos, are working on a after-Quito document «to inspire a more complex, open and incomplete vision of the city».
During our event, in the wonderful Centro Cultural Benjamin Carrion, we offered a summary of our research on service design for urban policies, telling of the process that led us to the developing of our projects: MUV, Open Tour and Street art Factory.

Back from Ecuador we immediately started dialoguing with the people we met and planning future collaborations for new international projects. Hoping to be able to disseminate and actively support the New Urban Agenda from Sicily we will hardly work to be present at the next appointment of Habitat IV, in twenty years, with new solutions for cities and citizens.