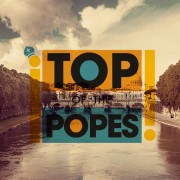 The site www.topofthepopes.com had a boom of visits: the fun quiz used to elect the Pope of the online community, in occasion of the 2013 conclave.
Similar to the famous television show that featured a hit list of the top songs, Top of the Popes allowed users to their own ideal candidate by answering the questions of the quiz, and to share it on the social networks.

The game was online from March 8th to the 13th, until the very awaited moment of the white smoke in Piazza San Pietro. In 122 hours the site registered over 16,000 visits, coming mainly from Europe, USA and Canada.

The users answered 5 questions on the quiz, which decided their ideal successor for Pope Benedict XVI: Luis Antonio Tangle, was the frontrunner with 18,47% of the votes. However, the conclave elected Bishop of Rome the cardinal Mario Bergoglio, who online placed 20th with 0,56% of the votes.

On the Facebook Page there was a record of likes, where the users commented and experienced live the awaited moment of the papal election. The visits mainly came from Italy, Spain and Mexico, as well as on the Pinterest Board entirely dedicated to the project.

A lavish press release, a highlight among the others, was the article published on the Huffington Post, which followed with enthusiasm the creation of the initiative.