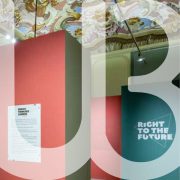 “I Quaderni” #12 of the online journal UrbanisticaTre is titled “Right to the Future – The participatory process for the implementation of the New Urban Agenda in Palermo” and is edited by PUSH and urbanita.

We are really proud of this publication entirely focused on the experience of our second Urban Thinkers Campus that took place at Palazzo Sant’Elia from April 6th to 8th.

It describes first of all the process ending with the ratification of the New Urban Agenda, document aimed to inspire the future of the cities for the next 20 years. Right to the Future’s main goal was indeed to collect “visions”, a crucial concept for a city like Palermo that needs to decline its own agenda towards a right and more sustainable future.

“I Quaderni” #12 presents then the participatory process that we followed to organize the event: from the 100 millions for the future of Palermo survey that we used to ask participants to imagine to manage 100 millions for the city growth, to the Call for visions launched online to collect proposals and ideas to improve the quality of life in our city.

The publication, moreover, includes some of the most valuable ideas selected by the Steering Committee: Elisabetta Rizza’s proposal to have linguistic tandems in order to foster social inclusion in a multicultural context like Palermo; CivES, the new model for community welfare already implemented in Molise by Luigi Piccirillo; Marco Terranova and Benedetta Rodeghiero’s proposal for an urban regeneration process that starts from kids; the digital platform proposed by Michelangelo Ferri to stimulate collective agriculture activities in peri-urban contexts; Sicily & Sicilians, socio-cultural project realized by Sandro Aglialoro to support young sicilian artists and the idea of Sara Rizzo who, after a long period in the Brazilian favelas, wants to implement here a model for young entrepreneurship able to reactivate cities.